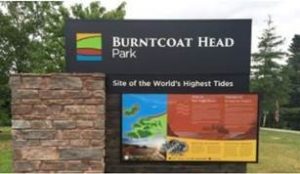 The Honourable Scott Brison, President of the Treasury Board and Member of Parliament for Kings-Hants, on behalf of the Honourable Navdeep Bains, Minister of Innovation, Science and Economic Development and Minister responsible for the Atlantic Canada Opportunities Agency (ACOA), was at Burntcoat Head Park today to see first-hand infrastructure upgrades at the popular tourist attraction aimed at further positioning the site as one of the Bay of Fundy’s outstanding visitor experiences.

Capital upgrades included concrete stairs to the ocean floor, a septic/well system, public washroom facilities, upgrades to the interpretive centre, and trail development. In addition, six interpretive panels have been custom designed and installed throughout the Park.

The Government of Canada, through ACOA’s Innovative Communities Fund, invested $232,415 and the Province of Nova Scotia, through Tourism Nova Scotia, provided financial support of $65,000 toward the project managed by the Municipality of East Hants.

Over 500 businesses from Amherst to Digby rely on the tourism draw of the Bay of Fundy. Improvements to the accessibility and services available at Burntcoat Head Park are key to attracting more visitors to the region and enabling rural businesses to better capitalize on their proximity to this tourism asset.

The Park programming and summer season operations are conducted by the Burntcoat Head Park Association, a local non-profit group. In summer 2016, four staff were hired by the Association to operate the Park, including offering guided tours of the ocean floor. Events such as The Flying Apron Cookery’s “Dining on the Ocean Floor” and Tourism Nova Scotia marketing have given the park increased visibility on an international scale over the past two years.

“The Government of Canada, together with the Province of Nova Scotia, is committed to investing in projects to stimulate the region’s economy by highlighting and making more accessible the natural beauty of the area. The contribution to public infrastructure makes us more competitive, strengthens our communities and improves our health, well-being, and quality of life.”

“The entire Bay of Fundy region is a vital part of Nova Scotia’s tourism and economic development, and projects such as this go a long way in enhancing the visitor experience. Burntcoat Head Park is a natural gem in this region and the upgrades will allow more people the chance to explore a fascinating geographic area here in the Municipality of East Hants.”

“Burntcoat Head Park offers a world class Bay of Fundy experience at the site of the worlds’ highest recorded tides. Park enhancements will continue to help attract visitors to the area and create opportunities for businesses and residents in East Hants.”

“Council’s vision for the Burntcoat Head Park development project was to leverage this incredible natural attraction as an opportunity to inspire visitors and generate economic growth in the local area. It has been very rewarding to see this vision become a reality and to see the increasing numbers of visitors from around the world enjoying the park. Local businesses are already reporting benefits from the increased traffic along Highway 215, and we expect that growth pattern to continue.”

Burntcoat Head Park, on the Bay of Fundy, is comprised of almost four acres of generally flat to gentle rolling, dry, useable land, which is separated from the shoreline edge by a cliff-line of approximately 30-50 feet in height. The park also includes a relatively large (.5 to .75 acre) flowerpot island, situated approximately 50 meters seaward of the cliff line and accessible, at its base, as tidewaters recede.

The Park is owned by the Municipality of East Hants and managed by the Burntcoat Head Park Association. It is recognized as the site of the world’s highest recorded tides, which reportedly range up to 53.6 feet. One hundred and sixty billion tonnes of water flows daily into the basin every 13 hours, which is more than the combined flow of the world’s freshwater rivers. This iconic status supports the claim that Burntcoat Head is an outstanding destination attraction on Hants County’s Fundy shoreline, both for visiting tourists and local recreational users.

The Park is within 90 km of Halifax, positioning it as the closest Bay of Fundy tourism attraction to this major market. Even though located in Hants County, Trip Advisor has ranked Burntcoat Head as the 13th best attraction for visitors to Halifax. This makes it the highest-ranked attraction on the list that is not within the Halifax Regional Municipality.