February 6th, 2017 (ENFIELD, NS) – The Municipality of East Hants is preparing for the installation of two water transmission mains that service Enfield, Elmsdale and Lantz.

The need was originally identified in a commissioned study completed in 1999 which projected a need for transmission main expansion once the systems average daily flow rate surpassed a specific targeted amount.

“It was verified both in 2014 and 2015 that the average daily flow had surpassed the targeted daily flow rate for system expansion,” says Jesse Hulsman, Municipality of East Hants Director of Infrastructure and Operations. “Once the need was confirmed staff started to seek out funding options to support the required infrastructure needs and ensure water security for existing customers.”

Water supply at the Enfield Water Treatment Plant is currently limited to one access route, but with the installation of the two water mains a secondary route will be put in place for better support of a system that has outgrown its previous daily flow design.

“The installation of these water mains provides future growth and sustainability for the community of East Hants,” says Municipality of East Hants Warden Jim Smith. “In particular, they lead to greater water security through operational improvement and enhancement in fire protection capabilities.”

The projects are being funded through the Clean Water and Wastewater Fund announced in August 2016. The province and federal government will share the cost:

“Upgrading municipal infrastructure for water and wastewater is important for the health and safety of Nova Scotians,” said Hants East MLA Margaret Miller, on behalf of Municipal Affairs Minister Zach Churchill. “Our community is one of the fastest growing in Nova Scotia, and these enhanced services will benefit our current and future residents.” 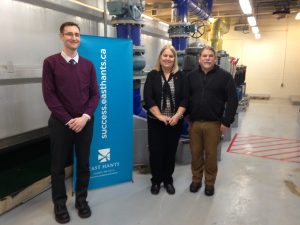