Innovative people and businesses in East Hants are making these words a reality, bringing new energy and excitement to our community.  This summer, Chill Street, Halifax C&D Recycling, and Tide Fest have all developed projects to innovate and inspire East Hants and beyond.

Chill St. | Being the first of its kind

Chill Street Fresh Beer and Cider Market is a new kind of brewery.  Rather than opening a stand-alone location, like many other breweries, the company opened their store right inside the Elmsdale Sobey’s grocery store.

Partnering with a grocery store brings food and craft beer together. Customers can explore ways to match beer and cider with their favorite foods.

Chill Street is not only bringing convenience and creativity to customers in East Hants – they’re bringing jobs too!  Around 10+ people have been hired at Chill Street’s retail outlet and their commercial space in the Elmsdale Business Park. “We’ve been super lucky to find and adopt into our family some of the funniest, most positive, clever, super-chilled individuals that East Hants has to offer (Chill St’s website)”.

Chill Street is opening their doors and everyone is invited to stop by for a beer/cider tasting experience, live music, barbecue and more – July 28 to July 30 – Elmsdale, NS.

Halifax C&D Recycling, a long-time business in East Hants, focuses on when the rubber leaves the road, rather than where it meets it.  The heavy industrial and commercial land development company is passionate about environmental sustainability and practical, innovative applications for new products derived from recycled materials.

In January 2017, Halifax C&D was contracted to develop three lots in the Elmsdale Business Park to provide lease space for new businesses.  What is different about this development? Rather than using standard clay fill, Halifax C&D is using Tire Derived Aggregate (TDA) made from recycled tires. 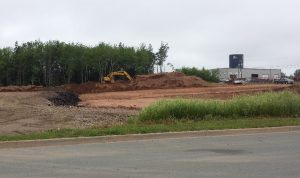 TDA is being used more and more in projects throughout North America.  In addition to Halifax C&D’s existing commercial land currently for lease in Milford, TDA has been used in a number of construction projects.  TDA was used in the Amherst Waste Water Treatment Plant project in 2011 and won the 2014 Lieutenant Governor’s award for Engineering Excellence. Also, the Ragged Lake Bus Connector to Highway 103 received honorable mention for the same award.

Currently, the upgrade for Highway 102 Kelly Lake Scales will use TDA and potentially the Enfield scales on Exit 7 soon after.

In the Elmsdale Business Park, Halifax C&D is working with Dalhousie University to monitor the performance of TDA. “TDA is a product that is both lighter and stronger than traditional soil backfill,” explains Dr. El Naggar of Dalhousie. “It diverts waste from our landfills, turns it into a revenue stream and has a wide range of applications.”

“We’re excited about the opportunity to use TDA in the Elmsdale Business Park and further research Tire Derived Aggregate in soft soil applications.”, says Mike Chassie, VP of Halifax C&D Recycling Ltd.  “TDA has come a long way since it was first used in road building projects and this is a great new use for the material.”

The organizers of Tide Fest started thinking about a homecoming – what better way is there to celebrate East Hants than the good feelings and excitement of having all our people home?

The Come Home East Hants Association successfully organized Tide Fest on July 14th-16th 2017.  Many local companies, athletes, and teams supported this event – the first of what is hoped to become an annual event. The business community was satisfied with the results and shared some thoughts.

Louise (Funky Farmgate Farmers Market) said, “it was a positive experience, great food traffic, and a good variety of activities for everyone”.

The main event in the festival was the Washer Toss Tournament, which brought 626 participants from all across North America to set a new Guinness World Record for largest washer toss tournament.

Unofficially, the goal was achieved – as long as the result is verified. Tide Fest shattered the former record held by Wise, Country, TX which had 486 participants.

East Hants came back home to make history and impacted our local economy.  As mentioned on CBC’s article, Kody Blois, president of Come Home East Hants Association, said “Tide Fest was developed to create a festival that could benefit local initiatives in the community”

Over 3,000 people participated in the events over the course of the weekend. The Tide Fest Executive Committee would like to thank the East Hants community and local businesses for all of their support.

“Events like Tide Fest don’t just happen, we are lucky to have a community that still supports its own, including our local businesses which stepped up and made the entire weekend possible”.-Kody Blois

To find out how East Hants can help you determine your next commercial development location or grow your business in the Municipality contact us at 902-883-4355 or business@easthants.ca

Department of Economic and Business Development